To study the phenomena of weight misperception and to assess the intentions of weight management in the adult population of Karachi, Pakistan. Factors which lead to weight loss efforts will also be identified.

A cross-sectional study was conducted with a total of 450 male and female adults aged 20 to 60 years. Data was collected through purposive sampling technique. All participants had their weight and height measured and filled a questionnaire asking about perceived weight status. Data was analyzed using SPSS version 20. Chi square was used to form associations, with P value of less than 0.05 being taken as significant.

Based on body mass index (BMI), 13.3% of the participants were underweight, 54.9% were of normal weight, 25.3% were overweight and 6.4% were obese. Misperception was prevalent in 37.8% (40.3% in females versus 33.1% in males) of the subjects. 28% overestimated their weight and 9.3% underestimated their weight. About 46.7% of underweight, 17.6% of overweight and 31.7% of obese participants were not making any efforts about the discrepancy in their weight. 28% were trying to lose and 28.7% were trying to control their weight. The highest rated reason for this weight consciousness was ‘feeling better about myself’.

There was more weight misperception in females than males with a tendency of overestimation in females and underestimation in males. More females were trying to lose weight and more males were trying to gain it. A significant number of participants were making efforts that were not in correspondence with their weight status. Satisfaction about self was rated to be more important than health concerns. 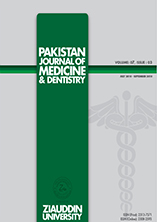